Gary A Boyd, The Architect's Journal, March 8, 2014
Open a larger version of the following image in a popup:
Share

In This is Not the Time for Dreaming - Pierre Huyghe's puppetry film about the inception and design of the Carpenter Center for the Visual Arts - the marionette representing Le Corbusier is assailed by a black praying mantis-type figure. By this point the narrator has already explained that this is an incarnation of Harvard University itself, the spirit of the place, whose expectations fall not only on the architect, but subsequently on the film-maker Huyghe. Yet the dark figure seems to represent more than just the phantom of an institution. Instead, as it looms around, probing various characters with its dark feelers, it feels like doubtful moments of creativity - the terrifying emptiness between the architect/artist and a yet-to-be-realised object. As the puppet Carpenter Center is pulled into shape around both the phantom and Le Corbusier, first in wire-frame, then in varying provisional forms, the figure becomes perhaps the ghostly personification of the design process. 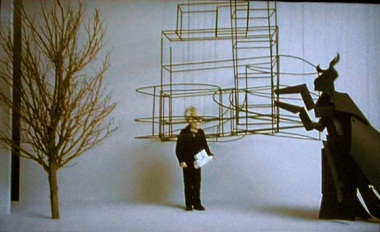 A still from Pierre Huyghe's puppetry film This is Not the Time for Dreaming.

Ten years after its original outing at the Carpenter Center, Huyghe's work is on show at the Lewis Glucksman Gallery in Cork as part of Folly: Art after Architecture. The exhibition recasts architecture as a muse offering meditations by artists who have found inspiration in certain buildings. These range from the darker inferences of madness in the word 'folly' found in Huyghe's film, to more joyful interpretations as the qualities that made these architectures significant are played with, exposed, re-canonised and made ambiguous.

Lina Bo Bardi's Casa de Vidro/Bo Bardi (1951) is remixed into lush and garish Carmen Miranda colours on a huge canvas by the painter Eamon O'Kane. Walter Gropius' obsession with pre-fabrication is channelled through Jeff Carter's realisation of the architect's Chicago Tribune Tower competition entry (1922) using components sourced entirely from IKEA. Artist Blaise Drummond's painting of the Farnsworth House, meanwhile, seems to flip landscape and architecture. It is the canvas that becomes white, while the house is visited by a stylised blue cloud and brown tree and has its windows filled with colourful signage and adverts. 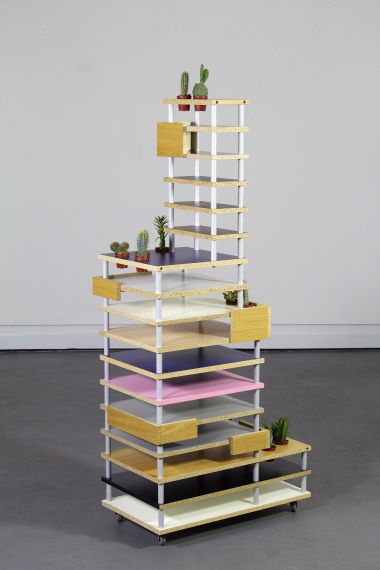 Other pieces are more poignant. Laura Gannon's split-screen film about E1027, A House in Cap Martin, depicts an old woman (the figure of Eileen Gray) wandering around the periphery of the building, touching pieces of its decaying fabric. Inside the house another figure, this time male and dressed in black, silently, but confidently, pontificates to another male. Domestic spaces are starkly unhinged in Chris Mottalini's photographic piece, After You Left They Took it Apart, which records the last moments of Paul Rudolph's Micheels House (1972) in Connecticut just before its demolition in 2007.

The buildings discussed in this exhibition shared a mixed collections of fates. The Micheels House no longer is. Gropius' Chicago Tribune Tower never was. E1027 has had an uneasy history - the victim, perhaps, of cultural indifference. Others exist, but do not necessarily follow the function to which they were originally designed. Most, however, are interconnected through the culture of Modernism. The earliest, Gropius' tower, was unrelenting in its vision of unadorned transparency, realised through its use of a frame and promises of mass production - devices seen clearly in the ethereal Farnsworth House (1951). Mies' appointment as director of architecture at Illinois Institute of Technology and Gropius' as professor of architecture at Harvard University were part of the process whereby these techniques and intentions were transmitted to the United States. Among those taught at Harvard was Paul Rudolph whose Micheels House was a late example in a series of lightweight, framed constructions whose relationship to the ground beneath was often mediated through thin columns à la Le Corbusier's five points.

Le Corbusier's Carpenter Centre found a contemporaneous Brutalist companion in Rudolph's Yale Art and Architecture Building (1963). It was in the latter institution that Robert Venturi penned Complexity and Contradiction in Architecture (1977). This was Venturi's indictment on the hegemony of Modernism where he argued for less abstract architectures of varying hues and styles; ones which admitted the lessons of history where form and content could be distanced from each other - where architecture could become more playful, or played with. Hiroshi Sugimoto's photographs capture examples of this - in the regionalism of Peter Zumthor and eclecticism of Philippe Starck - alongside other, canonical pieces of Modernism. That they are all black and white and out of focus places the buildings within the same register, the irreducibility of iconic form. But while Sugimoto's photographs concern the aesthetic and visible and Huyghe's film engages not yet architecture in a state of becoming, they complement one another and some of the other pieces in striking elegiac notes on Modernism and the position of the architect. The photographs, beautiful as they are, register an architecture stripped of its function, its aspiration to be socially useful reduced to form and composition. And, for all the angst and deliberations of Le Corbusier in This is Not the Time for Dreaming, it is seldom the architect who ultimately pulls the strings.

Gary A Boyd is curator (with Fiona Kearney) of Folly: Art after Architecture; reader in architecture at Queen's University and curator of the Irish pavilion at the 2014 Venice Architecture Biennale with John McLaughlin